The Theatre.js Studio API enables you to define extensions that extend the Studio's UI and/or extend the functionality of Studio.

This extension API is not stable, and it will change in the future, but it is relatively easy to use. To help you learn the API, this article walks through building an example extension that shows off some core features of the API. But, before we start building, let's take a look at the Studio, so we know what and where buttons, switches, and panes are.

#Anatomy of the UI

Here's an image of the Studio with two extensions on a webpage with a gray background. Below the image is a table naming and describing the parts of the UI. 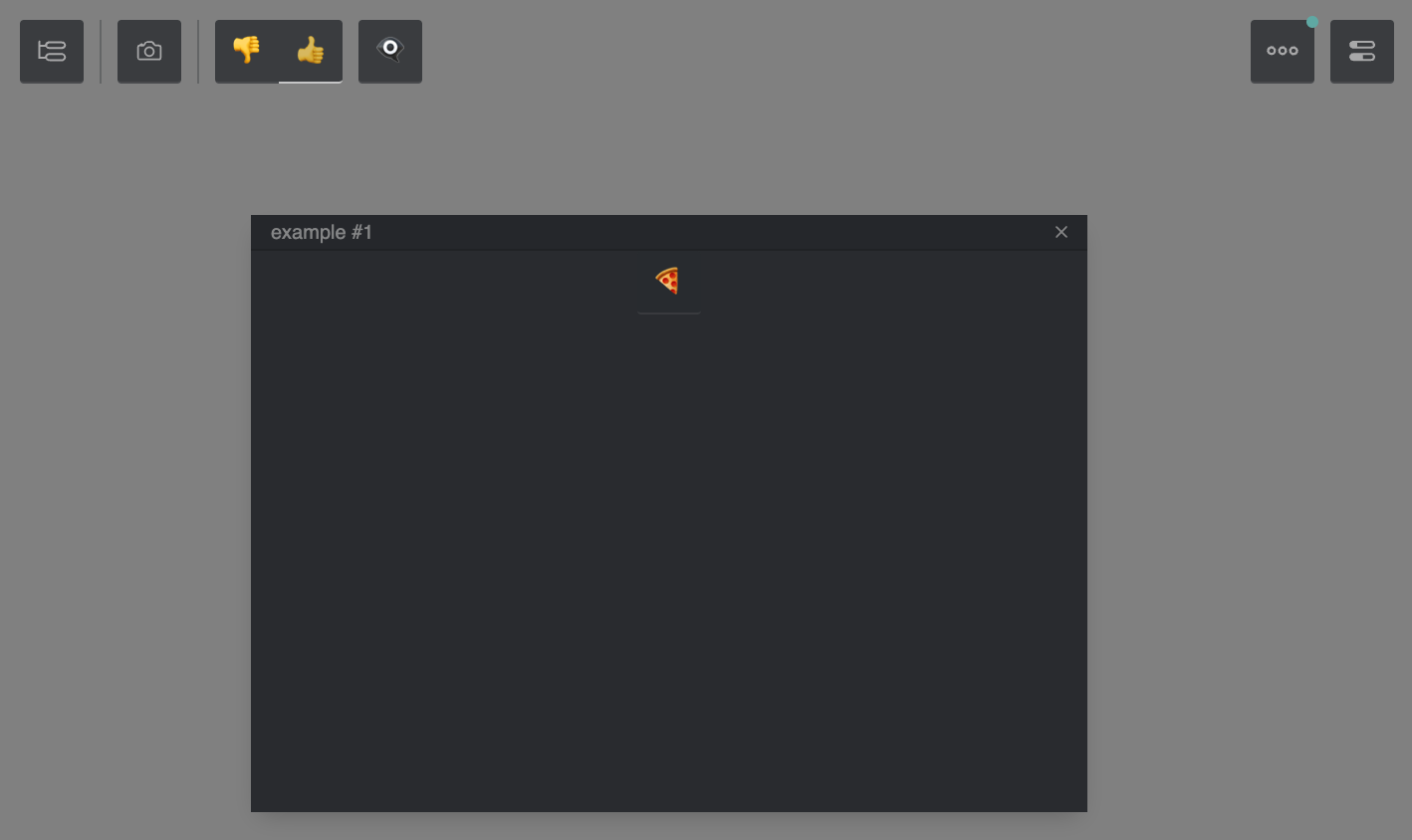 Now that we've taken a look at the different parts of the Studio's UI, let's extend it with our own functionality.

Below is the starter code for an extension that, so far, just has a single toolbar button. After adding this code to your project, you will see an additional "👁" button appear in the top left of Studio; hovering over the button will display the tooltip "Example Button".

Extensions are defined using a JavaScript object that your code passes as an argument to studio.extend(extensionConfig) before your code calls studio.initialize(). Your extension object requires a unique id, a toolbars object – an object containing functions that set toolbar data so that Studio can display your extension toolbar buttons and switches – and a panes array – a list of objects that define your extension's pane metadata and callbacks. We'll talk about panes below, but for now, let's take a closer look at creating buttons and switches.

In order to define global buttons and switches, you must implement a toolbars.global(set, studio) function in your extension config object.

This function is called by Studio upon initialization of your extension, with the arguments set and studio.

In order to define buttons and switches, you call the set() callback in your extension's toolbars.global(set, studio) function with a ToolsetConfig array. Let's take a look at how to do that now.

Below is a modified TypeScript snippet from the starter code above that defines a button with an onClick callback that you can customize to do whatever you want.

Below is a modified toolbars.global(set, studio) function that defines a switch with two options: 'yes' and 'no'. A switch can have multiple options, but only one may be selected at a time, as determined by the switch's value. When defining a switch, note that you have to manage setting and changing the switch's value yourself. To do this, you define an onChange(value) function which calls toolbars.global's set callback with a brand new ToolsetConfig array containing the switch metadata, but with a new value. Let's take a look at some code that does just that:

Panes are like windows that can be opened, closed, resized, and moved around the screen. Simply add an object to your extension config's panes: [{ class, mount }] array where:

We can return a () => void function from our mount(pane) function to be called when the pane is closed, which you can use for cleanup.

To open a pane you defined in your extension, simply call studio.createPane(id).

#Buttons and switches in a pane

The two key things to note in this example are:

So far we took a look at how you can extend the Studio, in this section we'll see how to extend its behavior.

We can listen to selection changes with studio.onSelectionChange(callback).

Here, newSelecton is a list of Theatre.js Objects and/or Sheets.

We can then set the selection with studio.setSelection(array), passing in the Sheets/Sheet Objects to be selected.

There are two ways to set the values of props using the Studio API: transactions and scrubs.

Both transactions and scrubs create entries in the Studio history stack, so the author can undo and redo them using ctrl+z.

All changes made within the fn are grouped into a single undoable action. Changes made inside a transaction are either all committed, or all discarded.

While transactions require us to do all our changes at once, scrubs allow us to add changes to a transaction over time, which we can later either commit or discard. Changes are immediately reflected in the state, however an undo-step is only made on commit.

Scrubs are useful for example to implement drags, where we don't want to individually commit every in-between value to the history stack, only the end-state.

Putting all these concepts together, we can create sheet objects via our extension. This has the benefit of persisting our extension's data across reloads and project states.

This approach has the added benefit that the state of your extension is managed by the Studio, and can even be modified and animated using the Studio.

#Putting it all together: a direct-manipulation extension

Finally, we can take everything we've learned about extending Studio with buttons, switches, panes and custom tools into one extension! Below is a CodeSandbox with running TypeScript code.


Try clicking and dragging the 🥚, 🐣, or 🐥. Once you've finished dragging, try pressing ctrl+z to undo the drag. Also try using the Studio Outline tree to select objects and notice how it affects the styling of the 🥚, 🐣, and 🐥 and vice versa. You can even drag around the objects while creating keyframes for animations.

Want to learn more? Take a look at some more in-depth topics from our manual:

This guide covers Sheets in Theatre.js

In this guide, we'll explore the tools that Theatre.js offers for creating animations.

Learn about assets in Theatre.js

Learn how to load and synchronize music or narration audio to an animation.

Learn the different parts of the Studio.

A catalog of controls in Theatre.js Studio.

Was this article helpful to you?

Theatre.js
Theatre.js is a design tool in the making. We aim to blur the line between designer/developer, author/consumer, and artist/scientist.